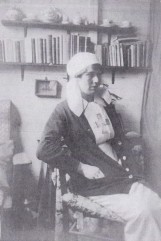 I am up to the eyes in work: material to prepare for reports and end of the month etc. is the very devil.

The weather is horrible: it doesn’t freeze but it is bitterly cold and raw and bites into the marrow of ones bones. Fortunately we have a big stove in the mess and some little ones in our sleeping hut but in spite of them we scuttle quickly into our beds at night and throw on our garments in the morning very hastily. Going to make your bed and tidy your room after breakfast is the limit. However I’m very fit and full of beans and not really minding at all. The garden is feeling very miserable: things have a tendency to damp off in this beastly cold weather!

You have never told me how bad Vear’s knee is, or how he is getting on. I cannot think what happened to my letters: I wrote as soon as I got to France and another letter a few days afterwards: it is awfully sickening, but though I have had all your letters, one every Sunday from you both and sundry mid-week letters from Father they take any kind of time from 4 to 8 days to come. Of course the posts have been very irregular as have the channel crossings so I expect that is partly it, but I don’t know why letters should get lost all the same. Perhaps they went into the Censor’s letter basket!!

However I got Father’s money it is ample: thank him very much indeed please, surely I acknowledged the hat-pin and gloves: perhaps in one of the missing letters. Thank you very much indeed for sending them after me – The Strand too is a great joy! We simply devour papers and magazines and books when we have a few moments.

I have been very gay lately: I went down to dinner with Miss Hunter (the canteen girl who was on the boat) perhaps I told you this. Then Tim and I went down to play bridge at her digs we got late leave from Sister (Matron being home on leave!!) and I didn’t break off till 10.30 and walked up the hill through driving snow to Bonsecours getting in at 11.30, to the tick which was the time to which we’d been given leave: we were so warm and glowing after a sharp walk up hill so that was rather a jolly evening. Then we stood her a dinner in town and since that Tim had a friend coming through and we had tea with him one day and dinner another.

Then we’ve been one or twice in herds to the cinema just to cheer ourselves on a beastly wet day of which there are more than enough.

Roy is as well as it is because he was a poor miserable boy never likely to be fit for anything. Where is Guy now?

Poor Tom Alder: I’m afraid Jane will be awfully cut up when the end comes, and Madge too.

I must say I noticed that Molly had changed a good deal to the observing eye. Not outwardly, because she looked well and fit, and the three years different existence does not seem to have tried her as much as I had expected; as I feared she was altered in character; her artistic and literary traits seem very much to have been knocked out of her; it was only to be expected but it is a pity all the same as it was a great part of her charm.

I’m glad she wrote you as she did after she left.

“Bossy” ought to be strung up to Haman’s gallows. Why hasn’t he been called up by the way?

Your letter of the 26th just arrived. I’m glad the N.W. is in such a satisfactory state. I didn’t know the Saltbys were satellites of Dr B. what fools they must be. I like the photos: the Sandalls are out of focus which is a pity. The two on the doorstep are quite good and the one in the nursery is not so bad but Peter would wriggle. Please send duplicates to Molly, I expect she would like to see them but don’t send her the films or I shall never see them again. It would be nice for her to see the Scotts again. I wish Tommy’s leave and mine had coincided we are most unlucky about that. I was so anxious to see him.

I was very amused about Ward !! He is a cracked old pot.

I am glad the hockey club is still keeping its head above water.

How is the hospital going at home? Do remind Mrs Baron every time you see her about my County badge. She is so slack about it! The weather is better to-day, sunny and no fog, but a sharp frost. You might look in my book shelves and find a book on Mendelism (not the thin one by BC Punnett but a smaller thicker one) and send it out to me. I’m very sleepy so shan’t write much more. Would you buy a shilling tin of Clay’s Fertiliser for plants and send it to Miss Loveday, 22 Chemston Gardens, Kensington W. mark it “For Miss Higgins” and then she, I know, is to bring it out to me.

We have had a nurse ill with Pneumonia: she was an oldish woman, not a lady, and half trained, but she was a nice old thing and we shall be sorry to lose her as she will have to go home. It is too dangerous to run a second risk.

I really must dry up now

With best love to you both and many thanks to Father for his more than ample relief.

Please send 2lbs of blackcurrant jujutes from Geo. Green and let me know the price per oz. as I am going to let some other people have some too. I also want some brass screw in hooks.