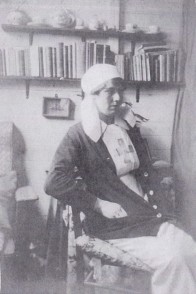 Before I forget I have had a letter from Miss Tate in which she tells me that she has sent you a cheque. She also says that she is sending me some books and games and knitted things for the men at Christmas which is awfully good of her.

The slippers you bought have not arrived yet: I shall not worry if they have not come in a fortnight’s time, so irregular are our posts. I think the French railway officials put our parcels in a siding and forget all about them!!

When you are at home if anyone likes to knit comforters (mufflers I mean) mittens, socks or gloves, or to give handkerchiefs, vests drawers or shirts, or slippers,felt or leather, the hospital will be grateful, as naturally the English committee ceases to provide us with such commodities, unless they do so privately. Handkerchiefs here are as rare as asparagus in November , they need only be of the commonest red cotton ( the men prefer the roughest coloured ones to the white)

Please don’t make it a work to do this but occasionally there are people who wouldn’t mind giving a shirt or a dozen hankies or a muffler or so forth especially to the Belgians who haven’t got relations to make and send them things. There are lots of our poor men who have never had a line from their relations since the war started and don’t know if they are dead or alive. So anything that you can do without putting yourself out , I should be awfully bucked if you would.

NEXT before I forget it will you write a few lines on a sheet of paper stating that I have your full permission and approval in my wish to stay here under the new regime : this should be signed by yourself and Father – Be careful not to put too definitely your permission thus do not put “under the Belgians” or “ under the Matron” as the new agreement is not very clear or fixed as yet. Also please ask Mrs Baron to draw up and sign a similar paper, signing it as my Commander, as soon as you conveniently can.

My telegram to Mrs Macdonald didn’t do much good but Sister went to London , as I told you and , so eloquent, I suppose so for we still haven’t heard from her) that the BRCS reversed their decision to recall us and we are allowed to stay provided the Belgians lodge and feed us and we stay under the BRCS and an English Matron. So all goes as Merry as a marriage bell bar Mr Maples who departed on Thursday night with his friend and adviser Mr Dickinson and one very ill-mannered eccentric Irish woman of uncertain age who used to be at Grival who was his only follower !!

He made a very illogical awkward address of farewell to us, on Thurs afternoon, when he read Arthur Stanley’s letter to him authorising our staying on and explaining to him that the BRCS had decided to reverse its decision to recall us. He tried to deny that he had felt ill and wished harm towards this hospital and felt himself hurt “ that he who was a few months ago our hero was now in our disfavour”. He was never our “ hero”, but he was the only person to help us out of the mess which Miss Maunder had made and so naturally we turned to him. However he’s gone now and done with I expect. But we had a narrow squeak of being forced to dessert our posts and leave our men to the mercy of Belgian scratch orderlies imagine the result!! It would have been a stain on the English and the English Red Cross.

We had a buck concert on the 8th and finished up by a grand spectacle “ the Allies and their anthems”. I hired my rig here and did France. I enclose a photo of myself alone and in the group. It was a roaring success and the men loved it.

I’m sending you over two little baskets and one bigger one made by our blesses. I bought them for you:please give one to B and one to May and keep the biggest one for yourself. I can send you more if you like to ask me for them, the men love making them, they can be made round or square , straight sides or sloping, cover or no cover ( lid I mean)practically anyhow you like. Personally I like the covered ones best.

Anyway don’t forget the official permissions from yourself and big Mrs Baron.

Best Love from your loving Dorothy