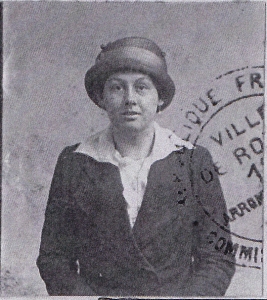 Thank you so much for your letters which were as always a great joy and full of interest.

I must tell you that on Thursday last I had a pleasant surprise : I was down at the flat with the other two: Tim and I were just waiting for an officer friend of hers to turn up , who was about to take us out for dinner. Suddenly the flat bell rang and so I flew off to open the door and hold the man in talking in the hall, as all of the other rooms are bedrooms and lo & behold there was George Walcott(Lloyd )  looking awfully bronzed and fit. It appears he went out to the battalion in the trenches about a month ago, and had just come down to Rouen to bring up another draft, but apparently the authorities are still keeping them here, so he is at a loose end, and was delighted to find a companion. I just talked to him for a bit, I arranged to go out to tea with him the following day, and then Tim’s man came, so we parted. The next day, George and I had tea at the buck tea shop of Rouen, and then went out on a train into the country, at least up to the hill of Bonsecours which is close to the town and from which you can see most of Rouen, miles of river and a lovely view with great stretches of country on the left bank of the river. Both sides of Rouen for some way up and down the river, the right bank is a range of humpy chalk hills, whereas the left bank is a gentle slope. The wild flowers on the chalk hills are lovely, a blue plant like borage ( it grows at Salmonby, but I’ve forgotten its name)    knap-weed (purple) centaurea and lots of others.

Then Sunday morning , we went to church together. Sunday afternoon, we motored out on the Neufchâtel road about 15 miles to fetch two girls who had been on sick leave, staying in the country. It is the main road to the front from here, and is in consequence, very bad and very worn. We saw convoys of motor lorries and motor ambulances going up to the front. We picked up the two girls and went on by a very pretty road to Clères, a junction on the Rouen-Dieppe line. It is quite a charming village with a tiny trickling river running through it and a funny kind of market-hall, like a cart shed, just a roof and supports, no walls. It is very picturesque though as it is built of huge square beams many years old. We had tea there and then went to visit the Chateau of Clères which is rather famous. It is the seat of the Duc de Choiseul, who is now at the front, but I believe his wife was there. We were however allowed to walk round the house and grounds. It is a magnificent old place, though the part that is habited has evidently been restored, but sympathetically so. Clères is about 22 kilometres from Rouen, so we got back about 6.15.

Tuesday afternoon George came up here for tea and then took me to a YMCA concert by Lena Ashwell Concert Party. There is a YMCA hut close to his particular part of the camp. The concert was from about 7.15-9.15 and very jolly. The whole audience was Tommies, bar about two YMCA officials and about 6 women. You would have enjoyed I’m sure. One Tommy came in with a baby owl sitting on his shoulder: it still had the fluffy plumage of its babyhood but sat there unconcerned with wide open eyes, in spite of the electric light, as its owner pushed his way through the crowd. Of course we had lots of old favourites and new ones too.

I enclose you a photo of myself like the one I sent Father. I hope you’ll like it. I’m going to send one to John and Elsie, as I have the film. I believe you asked me if the flat was more expensive. It costs each of us about 10 francs a month more, but its well worth it , with the extra space, conveniences even luxuries and above all air. The other place was so phuggy! I must send this off this minute or I shall miss the post. I’ll write more soon, I think I told you I sent my monocle to C&P.

Best love, ever your loving Dorothy.